Amazing as it is to even get your book reviewed, it's even more amazing to get favorable ones from sources like Kirkus. I'm chuffed!

History proves cyclical with this story of an African-American family living through the Great Depression. “Marshall didn’t feel so lucky. The elbows of his jacket were worn almost all the way through. Dad had been out of work for months, and there was no money.” The story, however, is not one of depression. The family works together to survive and finds moments of love, appreciation and sheer happiness. This moving tale not only relates a little history but also some math, as Marshall helps his mother estimate the number of beans in the furniture-store jar and ultimately wins a new sewing machine, which helps alleviate their dire financial situation. Tadgell’s watercolor illustrations move the story and stir readers’ emotions. A two-page spread of the contestants in the store teaches readers everything they need to know about the characters without a letter of text. Many children today can relate to the family’s challenges, which makes the timing of this picture book sadly relevant. (author’s note) (Picture-book. 5-12)
3 comments:

BIRTHA, Becky. Lucky Beans. illus. by Nicole Tadgell. unpaged. CIP. Albert Whitman. Mar. 2010. Tr $16.99. ISBN 978-0-8075-4782-3. LC 2009023901.
Gr 2-4–Money is tight during the Great Depression, and Marshall is tired of eating beans for dinner every night. When a local shopkeeper announces a contest to win a new sewing machine, he seizes the opportunity to make his Ma’s dreams come true. The catch is that to win it, he has to guess how many beans are in a jar. Birtha effortlessly describes how Marshall and his mother use math to find their answer. Young readers thus will discover fun, realistic applications for the estimating and multiplication skills they learn in their classrooms. Math is not the only subject in Birtha’s lively lesson plan, though. She also confronts the racism of the 1930s when a white girl tells African-American Marshall that he might not be allowed to enter the contest because “only white ladies can win contests.” An author’s note provides a brief description of the Great Depression and anecdotes from the author’s family history. Tadgell’s colorful illustrations, many full page, give the book an old-fashioned feel and include many period details, strengthening the text’s usefulness for social-studies classes. Children will appreciate the story’s humor and happy ending. Lucky Beans can be used across the curriculum to educate while it entertains. Ideal for classrooms and school libraries, it’s also a strong choice for public libraries.–Mary Landrum, Lexington Public Library, KY
3 comments:

Math and wry comedy mix in this lively historical story based on Birtha’s grandmother’s memories of life
during the Depression. Young Marshall describes his African American family’s hardship when Dad loses
his job and then his relatives crowd into Marshall’s room. Worst of all are the beans Ma constantly cooks.
Then a local furniture store makes an exciting offer: whoever guesses the number of beans in a huge jar on
display will win a new sewing machine. If only Marshall could win the prize for Ma so that she could earn
money by sewing. He works out a system to estimate (not guess) by counting the number of beans that fill
a quart jar, and how many quarts fill up a crock . . . and his formula works! The expressive watercolor
paintings show both the racism that Marshall and his family endure as well as his final triumph, and
Tadgell folds in humor, as Marshall faces what looks like a lifetime supply of beans. An informative final
note fills in more about the era’s history. 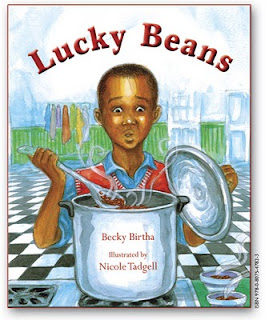 Here it is at last! LUCKY BEANS by Becky Birtha.
Published by Albert Whitman & Co. Spring 2010 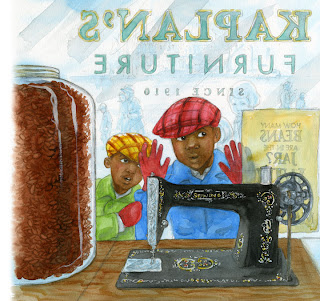 And here's a lovely review in the Horn Book. 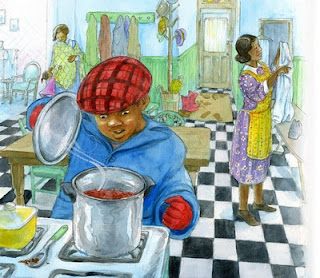 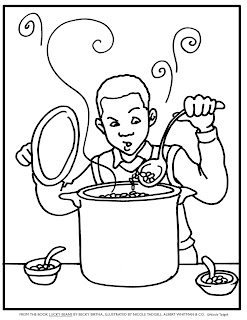 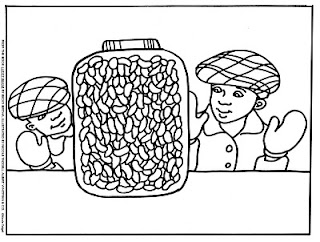 Wow, I'm going to be at the American Library Association's Annual Winter Meeting on Sunday in Boston, signing copies of my newest book LUCKY BEANS by Becky Birtha at the Albert Whitman booth.
I've never been to ALA and I'm looking forward to meeting people!
No comments: