Reviews: With Books and Bricks: The Story of How Booker T. Washington Built a School 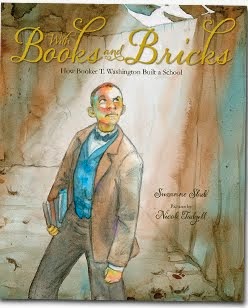 K-Gr 2–Booker T. Washington is a well-known historical figure, but the story of how he built the Tuskegee Institute by hand is not quite as common. This picture book brings the tale to light accessibly and engagingly. Young readers are sure to marvel at the accomplishments of Washington and his perseverance in spite of obstacles. The story is told simply, with beautiful watercolor and pencil illustrations. An endnote goes into more detail about Washington’s life and struggle to bring education to all. While this is not an all-encompassing biography, it is certainly a notable story about a lesser-known aspect of his life. Readers will enjoy this title, and it will easily tie in to school units as an enticing read-aloud.

Bookpage.com
LABOR OF LOVE
History comes alive in Suzanne Slade and Nicole Tadgell’s With Books and Bricks: How Booker T. Washington Built a School, an engaging overview of the life of the legendary educator. Washington’s dreams begin early, during his boyhood as a slave. A glimpse of sentences on a chalkboard in the white kids’ classroom sparks his desire to learn. Washington pursues his goal as slavery ends, teaching himself to read and graduating from an institution in Virginia. From there, his dreams get bigger, as he sets out to build a first-class school for blacks from scratch—literally—out of Alabama clay. With the help of students and supporters, he makes his vision a reality, establishing the world-renowned Tuskegee Institute. Tadgell’s softly realistic pencil and watercolor illustrations add special appeal to this tale of a tireless leader whose legacy can still be felt today. This article was originally published in the September 2014 issue of BookPage.
http://bookpage.com/features/17079-real-life-heroes-teach-young-readers-to-reach-stars#.VCBCKOc585J


Former slave Booker T. Washington’s childhood and single-minded quest for an education has been the subject of several picture-book biographies, but here Slade highlights a precise episode in Washington’s later life, when he arrived at Tuskegee, Alabama as an educator and discovered he had no proper building in which to teach. The leaky wooden edifice, crammed with students, needed to be replaced with a sturdy brick building, but there were no bricks and no money with which to buy them. The solution, so obvious to Washington but so trying for his students, was to make their own bricks. This required digging deep for Alabama clay, mixing it with mud and straw, molding it, and firing the bricks in a homemade kiln. The first batch of thousands of bricks were lost to a faulty kiln, as was the next batch, and the next. At this point, Washington knew a proper kiln was required, and he sold his own precious gold watch for it. The bricks were fired, the first of many buildings was erected, and the rest is Tuskegee Institute history. Slade supplies enough background on Washington’s childhood to provide context but keeps the focus mostly on this single event, putting further information on the institute itself into closing notes. Tadgell’s watercolor illustrations are literal enough to offer viewers a sense of place and process, while a recurrent rainbow theme—most effectively used to illuminate Washington’s features as he teaches under an umbrella in a rainstorm—reminds them of the elusiveness of Washington’s dream. Quotation sources and a short bibliography are included. EB