My day at the Eric Carle Museum

On Saturday, I was lucky enough to get to spend the day at the museum as an artist guest! First, I read No Mush Today in the Auditorium for the member's annual breakfast. There were a lot of people in the audience - more came in after I took this photo. 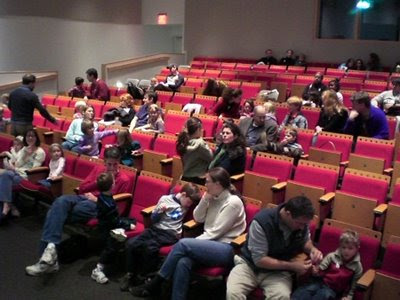 The folks at the museum had already scanned the pages of my book and put them in a Powerpoint slide show, so all I had to do was read the story and click a button. 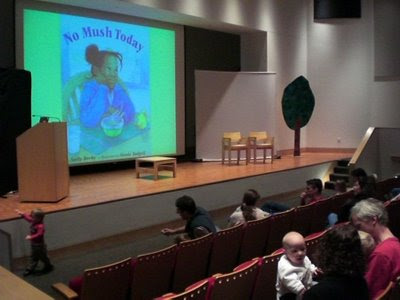 I had already been preparing a powerpoint show for an upcoming presentation, so I brought it along. When I asked the audience if they'd like to see how this book was made, there was a resounding "yes"!
It's very difficult to address an audience of such a wide range - infants, toddlers, preschool, elementary through adults, grandparents, too! So, I kept it real simple and went quickly. It seemed just right for their patience. I wasn't even anxious. :)


Next, I spent some time in the art room , drawing and painting with kids. Sometimes kids were shy, so I'd either just paint and let them watch, or I'd ask them what to draw.
"A rectangle!"
"Okay, what color is it?"
"Green."
There was a group of siblings who asked if I could draw them. I'm not a portrait artist, and I bet they would get bored sitting there for the length of time it would take to try to render them both accurately, so I asked "What is your favorite thing to do?"
The girl said "swimming", and the boy said "soccer". So I drew the girl in a pool, and the boy kicking a soccer ball her way. I drew the ball spinning in the air, the girl with her arms up protecting herself.
I wish I had snapped a picture of it - it was rough, but it was still a scene, a slice of life. That's what I love to do.

Next, there was a panel featuring Kinuko Craft, Jerry Pinkney, Rosemary Wells, and Paul Zelinsky. It was interesting, but I couldn't stay for the whole time. 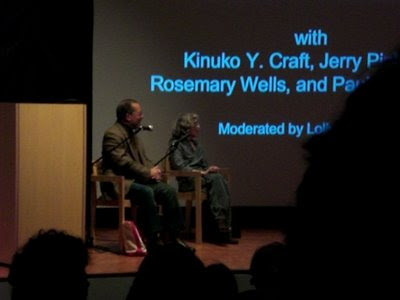 Then I read No Mush Today for museum visitors in the children's library at 2. This was really fun and up-close, me reading the book to about a dozen kids. Then I drew pictures for them. I asked them what I should draw, and got some fun suggestions.
"A train!"
Okay, where is the train going?
"The station"
Who is waiting at the station?
"A penguin!"
What's the train carrying?
"Balloons!"
So then I had the challenge of drawing a train (I don't think I've ever drawn one) coming into a station, with balloons billowing out, and penguins waiting for it! Again, I didn't get a picture, sorry!